‘If I was made of cake I’d eat myself before somebody else could.’
– Emma Donoghue, Room

By the time she was ready to put the cake in the oven, Annie had to accept that the kitchen was a mess! Flour was scattered over every surface, stuck in place by streaks of butter and cream, and she was pretty sure that she had used every single bowl, pan and spoon that they owned.

If she was honest, Annie hadn’t expected a baking request when she had asked Brad what he wanted for his birthday.

‘I have the whole day off,’ she told him. ‘I can do anything you wanted, go anywhere!’

She had hoped that he’d want her to visit him in the office and fuck him in the toilets, or spend the day taking photos to his specifications and sending them to him. One birthday he had asked her to edge all day. She had been practically vibrating with frustration by the time he came home and it took all of her restraint to hold back from ripping his clothes off in the hall. Brad always joked that she walked a fine line between bratty and insubordinate, but that was the closest she had ever got to disobeying his order not to come until he said so. That had been a good day!

But a cake? Annie had come downstairs in the morning after Brad had gone to work to find a mountain of ingredients, some bizarrely large cake tins and a recipe. No sexy asides, no other orders or requests – just cake. It was kind of disappointing!

Well, she told herself, if it’s all he wants, I’d better do it damn well!

And so she had spent all day beating and creaming in a decidedly unsexual way, following the recipe to the letter until it was finished. The perfect Victoria sponge, filled with jam and buttercream and lightly dusted with icing sugar.

When Brad came home, Annie had set the table for tea with the cake as the centerpiece. Once he had settled at the table, she cut him a large slice and passed it over.

After all of her hard work to prepare it, Annie couldn’t help but stare at each forkful of cake as Brad lifted it to his mouth and tasted what she had baked him. He didn’t say anything for a long time but his expression changed from perplexed to disappointed as he ate, and her stomach twisted in frustration that she might have failed this simple task he’d set her.

Unable to wait until he had finished the slice, she broke the silence to question why he didn’t like it.

‘There’s something missing,’ he responded, ‘It’s good, but it needs…something.’

He pushed the remaining cake away in a caricature of disgust, but he no longer looked upset. In fact, he looked delighted with himself! Brad’s face was split by a filthy grin and Annie began to feel like she was the one missing something, rather than her cake.

The cake sat between them, showing off the lightness of the sponge where the slice had been removed.

He wanted her to sit on the cake. Now it all made sense – the disproportionate amount of buttercream, the large cake for just two people, the fact that his instructions today had not included an underwear choice or in fact any sexual act at all!

Emboldened by her growing excitement at this messy treat, Annie couldn’t let Brad have all the fun!

‘You are the most delicious thing I have ever eaten but I still want to know what you taste like with cream.’

‘Shut up and sit on the damn cake!’

She stood and hopped up on to the chair next to Brad. Unbuttoning her skirt, she let it fall to her feet and stood still while Brad ran his fingers around the waistband of her tights and knickers before he pulled them down too. Naked from the waist down, her cunt was level with Brad’s face and he pressed his face into her soft hair, taking a deep breath before helping her up onto the table.

Heart pounding in anticipation and unexpected arousal, Annie positioned herself above her cake, knees on either side, and gently lowering herself down onto it.

‘Slowly. I want to see every part of your gorgeous arse destroying this cake.’

Her bare arse and thighs touched it first, the light dusting of icing sugar tickling her skin before she sank into the sponge. It spread out as she lowered herself further onto it, splitting the cake and exposing the layers of colder filling beneath.

This was what first made her gasp – the feeling of buttercream pressing into her vulva, squelching between the folds and into her arse crack. Annie wriggled slightly, spreading the thick and cold cream further, and shivered as it tickled her clit, splurging up between her legs.

With her full weight on the table, filled with chunks of cake and smearings of jam and cream, Annie wriggled again. She was a mess but she felt like a goddess, and Brad was gazing at her like she really was the most delicious thing he had ever seen. His mouth was practically watering!

He walked slowly around her, looking from every angle and occasionally reaching down to wipe cream further up and over her arse or to dip his fingers between her thighs to squelch into the deepest pockets of cake and jam.

When he had seen all he wanted to see, Brad helped her to stand and carried Annie into their bedroom. Lying her on their bed, he began to kiss and lick up her thighs and over her cunt. Cream mixed with come, sweet and sharp, and he tasted everything. Sliding his thumb up over her clit, buttercream and crumbs acting as a textured lube of sorts, he added firmer touch of his hands to the soft and creamy sensations provided by the cake as he continued to eat her out. Overwhelmed, Annie arched her body to push her vulva against him, eager for more and more and more, until she came with a messy rush.

Having eaten his fill, Brad took Annie to the shower and carefully rinsed all of the cake and sugar from her body, gently soaping her arse and using the soft jets of warm water to clean her still sensitive flesh.

Kissing her and holding her close, Brad whispered in her ear, ‘Now there’s no doubt. That was the best cake I have ever eaten…’

Thanks to Nikki at Love Is A Fetish and Abigail Williams for their help with aftercare when sitting on cakes – all you need is a shower! 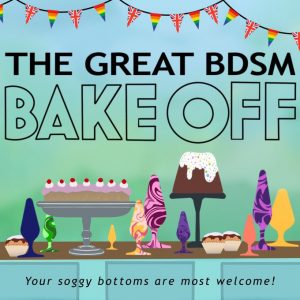