‘All you need is love. But a little chocolate now and then doesn’t hurt.’
– Charles M. Schulz

Sadly, I was voted out of Smut Marathon at the quarter finals stage this year so wasn’t able to equal or beat last year’s success as I’d hoped!

I’ve really enjoyed being part of this competition, especially as it’s encouraged me to keep writing fiction at a time when I would have struggled to prioritise it otherwise.

Typically, I was voted out after submitting a story that I was really proud of – it was a challenging brief that made me write outside my comfort zone as I don’t often take the risk required to write about something completely outside my own experience, but I was really happy with the results.

So here’s my final Smut Marathon story of 2019…

‘Can Jamie come to the staff room immediately.’

Jamie jumped. Karl wasn’t supposed to be in work today but even the affected sing-sing intonation chosen to match those cliched announcements in supermarkets couldn’t disguise his voice.

Ever since Jamie had drunkenly kissed Karl at post-work drinks last week, finally finding the courage to discover whether they had been imagining Karl’s lingering eye contact and unnecessary closeness, they had been waiting to see him again. The kiss had been good. It had been really fucking good, but Jamie had waited so long to do it that Karl had had to leave for the last train almost straightaway and now it was five days later and they’d not seen each other since.

Jamie had a plan. Karl never misses Thursday night drinks and they’d decided that they’d walk up to him and kiss him and take him straight home to finally, finally, fuck him after all this talk and anticipation, but now they felt caught out by his sudden appearance. What was he doing here?

But the shop was quiet and, looking over to the other staff who were crowded around the till chatting, Jamie gestured that they were going on break a little early and met no protest. Saturday afternoons in this backwater supermarket were so dull – the shelves were stacked already, the shoppers looking for dinner bargains didn’t usually arrive for several hours; there was nothing to do. They’d manage without them.

Entering the staff room, the first thing Jamie noticed was a large tub of chocolate spread in the middle of the table. The second was how Karl immediately locked the door behind them.

‘You think you taste of chocolate?’

There was a glint in Karl’s eye that made Jamie’s stomach drop. Fuck, what was happening?

Without a question, Jamie followed Karl’s instructions and lay on the battered pleather sofa. The cracks in the fabric scratched at their bare arms and neck, and Jamie realised how sensitive their skin had become as this was enough to trigger goosebumps all over their body.

Karl opened the chocolate spread and pulled up Jamie’s shirt to expose their stomach. He stared down at them, surveying them like they were his canvas. Smooth and soft with a few tufts of hair emerging from their waistband.

‘Now, I was promised the taste of chocolate.’

With an exaggerated artistic flourish and a wicked grin, Karl stuck the knife into the spread and scooped out a lump, dropping it onto their abdomen. Kneeling to get closer, he began spreading the chocolate paste across their skin, creating patterns and shapes.

The knife proved to be an interesting brush. He could use the flat like a palate knife, spreading soft swathes of colour across his canvas, but he could also use the blade. Cutting into the chocolate and subtly indenting their flesh, creating sharp lines and valleys. Jamie held their breath, knowing that Karl wouldn’t press deep enough to actually cut their skin but still not really knowing. Still feeling the tension of anticipation, the thrill of possibility. They imagined a thin line of red blooming between the mountains of chocolate, their pain also blooming as the shallow clefts filled and the painting Karl had drawn came alive beneath his blade.

Except he didn’t cut them. He just carved a delicate relief of lines and crosses and swirls, and then slowly, slowly licked it off their skin. Steady pressure on their stomach, hot and wet, spreading the chocolate and gently removing it until their body was almost clean again.

Karl pulled down their pants and kissed the remnants of the chocolate spread that still clung to their lower abdomen.

‘What do you call your junk? What words for them feel sexy for you?’

Shaken, shaking, Jamie reached down to point at their body, indicating each part in turn.

‘That’s my cock, and those are my holes.’

Karl parted their soft hair and touched their cock with the top of his tongue.

‘And can I touch everywhere down here? I want to touch you everywhere if you’ll let me.’

‘You can touch me anywhere.’

Smiling, Karl continue to explore Jamie’s body with his tongue. Licking in circles around their cock and sliding his fingers deep inside their front hole. Sucking, licking, swirling, he teased and toyed with Jamie until they were trembling with need.

‘Oh, that’s no good.’ Karl sat back and pulled Jamie’s clothes back into place. ‘Your break is over. Back to work!’

Stumbling to their feet and struggling to get their thoughts in order, Jamie managed to ask Karl if he was still meeting them after work.

‘Of course. I wouldn’t miss it! Especially as I have unfinished business with a boy I’m hoping to meet there.’

He kissed Jamie one more time.

My stories from this and last year are collected here. 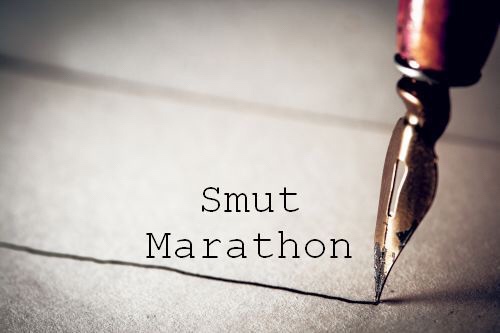