‘When you come out of the storm, you won’t be the same person who walked in. That’s what this storm’s all about.’
– Haruki Murakami, Kafka on the Shore

[Content warning: in this discussion on pain, I will be talking about labour and, briefly, birth trauma]

Discovering the world of sex writing has changed and improved my life in so many ways, mainly because of how much I have learned about myself and the world in general through this type of writing. Although I was initially attracted by erotica, as a way of discovering what turned me on and which fantasies I could develop and elaborate, it has been the personal writing and opinion pieces from sex bloggers that have had the biggest impact on me.

Because, as became clearer during this year’s Smut Marathon, erotica is very dependent on taste. Although good writing is always good, even the best erotica may do nothing for me if it’s not written about something that turns me on. I can appreciate the skill (and YKINMKBYKIOK, of course), but I won’t be (literally or metaphorically) gushing over it if it’s not my thing.

Real life writing, however, appeals to me almost more if it’s not about a shared kink; if it’s about something new or different. There are so many kinks that I just didn’t understand until I read about them. Examples that jump to mind immediately are posts from Bex Talks Sex on puppy play and when Honey wrote about urethral sounding. These are both kinks that, if I’m honest, I was a bit squicked out by before I read about them but such was the quality of the writing and descriptions of why they work as kinks for the writers that I got it, even if I still didn’t want it for myself.

Again, it was sex writing that showed me what I might be missing and made me realise that pain could be the whole point. Reading Bibulous One’s blog, particularly the posts describing his more intense experiences and more by Honey on how beneficial she finds pain, for example, revealed depths to experiencing pain that I had never understood. It’s not just the achievement in taking the blows or the joy in compliance. Perhaps naively, I hadn’t even thought that it might be the pain itself that was the attraction. That it could be so clarifying, that the endorphins really would make the pain feel good. I know that this disbelief is likely because my personal experience of pain had never been positive. Pain is an evolutionary response to tell you to stop after all! Pain is sharp, hot, aching, but always bad.

EA and I have toyed with impact play a little but my arousal always came from surviving the pain, not enjoying it. A sharp spank takes my breath away and can push my orgasm closer to the surface; counting down the blows from a paddle when I’m cuffed to hooks on the wall is fucking hot as it appeals to my exhibitionism – I feel on display, flexing and writhing through the pain and knowing how my reddening arse will be affecting him. Like when I read BDSM erotica, the pain is somewhat incidental to why I find these experiences meltingly hot.

And then I had a baby.

As I have written before, the pain of labour had always terrified me. It almost put me off having a baby at all and I certainly spent a long time psyching myself up to it once I was pregnant. Birth is going to hurt, I told myself. It’s going to be excruciating, it’s going to be horrific, but I can survive it. And I can always have an epidural to take the pain away if I’m struggling. It’ll be awful, I thought, but it’ll be worth it for the baby.

I’d never really experienced severe pain before labour but I knew that my tolerance of more minor pains was low. During pregnancy, I took a lot of pre-emptive paracetamol for everything from back aches, pelvic pains and cramps – all pains that I didn’t want to experience. I wanted to numb everything that could be numbed! And when I passed my due date and needed to be induced, I started taking the max dose of paracetamol immediately to keep the pain as hidden as possible. And then when the contractions started, I put on the TENS machine even when they were (with hindsight) ridiculously weak to take off whatever edge that I could. I didn’t want to feel anything and found that I was quickly exhausted by the increasing pain.

This is when it started to become strange. What I was feeling was exhausting. It was insistent. It was repetitive and horrible and made me moan aloud in distress, but I’m not 100% certain that it was pain. It wasn’t any pain that I recognised. It wasn’t like the muscular pains I had after running or exercise. It wasn’t localised or associated with movement or stiffness. It wasn’t like the sharper pain I’d felt with cuts or stubbed toes or grazes. It wasn’t like the deep cramping abdominal pains when I’ve had an upset stomach. It wasn’t even like period pains when the hot cramps compress my abdomen and pull on my back.

And unlike what I would expect from ‘classic’ physical pain, I have no doubt that the stresses surrounding the early part of the labour made it much, much worse. We had possibly come to hospital too early as I had mistakenly thought my waters had broken and, even though contractions were occurring every 2 minutes, the midwifery team were vaguely talking about sending us home. Sadly, the maternity unit was extremely busy at that time so all decisions and interventions were taking ages. My regular paracetamol dose was delayed; we had to wait for a cubicle before other painkillers could be suggested; we weren’t given a clear management plan as the next steps weren’t obvious at that time. Frankly, I didn’t cope with it very well!

But that wasn’t what happened. Eventually, we had a plan and our own room, and I calmed down. We had a proper discussion with the midwife about what might happen next and so could make realistic choices about pain relief options. However, we were still at a crossroads of sorts, and the next few hours would force our hand one way or the other – either labour would progress and our baby would arrive soon, or it wouldn’t and we’d need to repeat the induction, potentially extending the labour by a further 12-24 hours. In light of this, we chose a diamorphine injection (essentially heroin by a more palatable name) until we knew more and I fully intended to then have an epidural.

But already, the contractions had become more manageable. In the more relaxed surroundings of our room, I was able to absorb the pain more effectively without feeling so overwhelmed. And the diamorphine was interesting too. It didn’t really change the quality of the contraction pains at all but it did make me drowsy enough that I was able to sleep between them. My exhaustion melted away and I could just get on with it. The contractions got stronger and more intense, and I moaned louder to release the pressure. Each contraction would wash through me, but then it would be gone and I found myself to be swimming in calming endorphins that made it all feel OK. More than OK, which was confusing. The sensations certainly weren’t like any pleasure I’ve known and I’d hesitate to even call it pleasurable, but it was also not like any pain either. It just was, and when each contraction was over, I felt stronger not weaker, empowered not exhausted. Even when the analgesic effects of the diamorphine wore off. Even when the hours continued to pass and I realised that I hadn’t had any pain relief at all for over eight hours but still turned it down when it was offered…

Looking back now, my response to this deep, intense pain genuinely baffles me. I felt disconnected from it, almost disconnected from reality. Serene but somehow almost euphoric, with the midwives commenting on how much I was laughing between episodes of contractions. My memory of it all isn’t really that clear anymore. Maybe it was the drugs! But it feels like more than that, and I am reminded of the descriptions of pleasurable pain that I had read about before. Was this the subspace that I had heard so much about but never experienced? 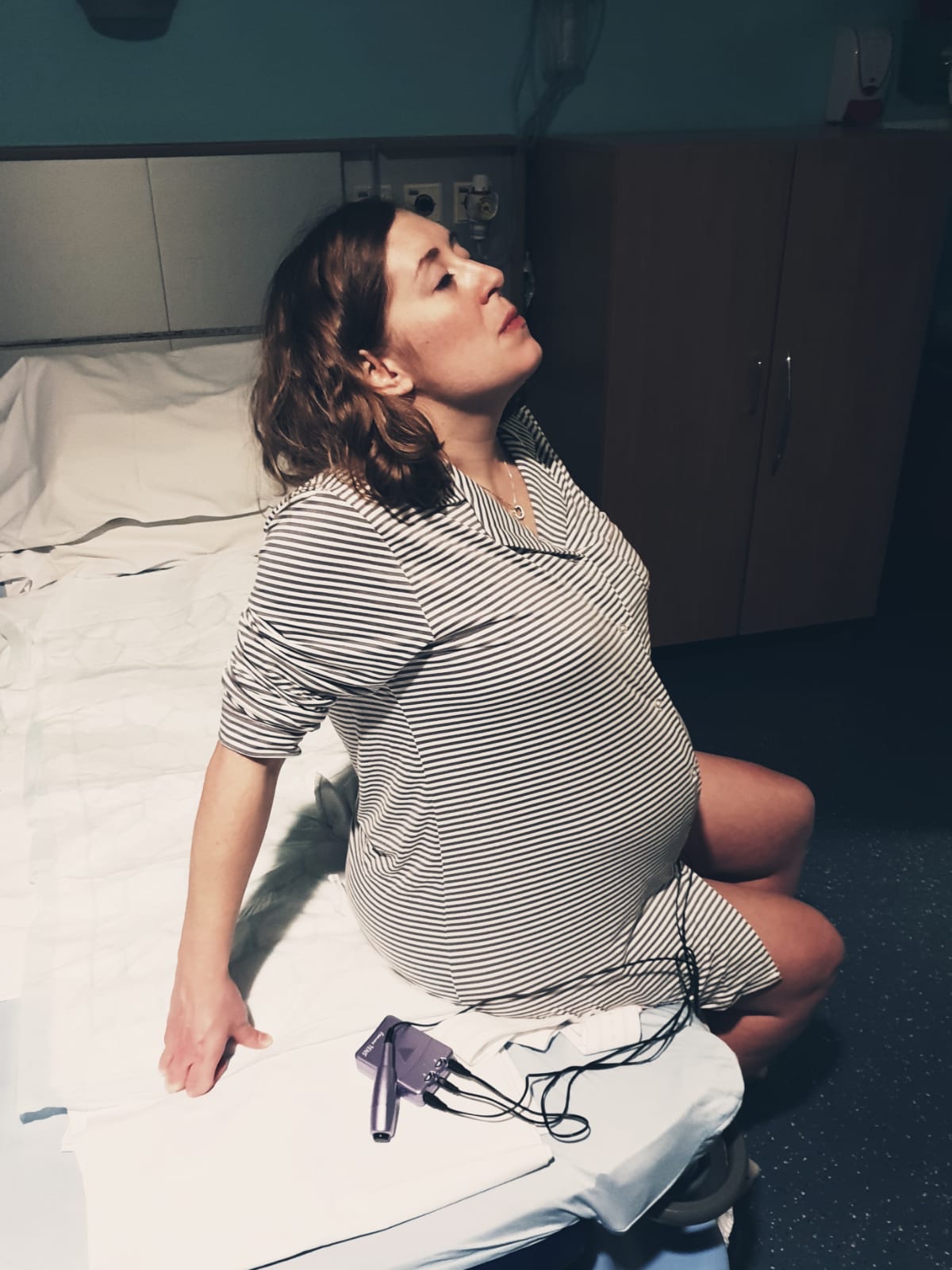 That’s not to say that the rest of the labour was pain-free! The actual delivery was fucking horrendous, as I’d feared. Moans that EA had earlier joked sounded similar to my orgasm noises became increasingly guttural and louder and more like, well, agony. But now the pain was very different, and was a pain that I did recognise – stretching flesh, tearing skin and muscle, and the eventual realisation that no amount of perineal massage would make me stretchy enough to let out a 9lb 9oz baby without an episiotomy. (Honestly, the local anaesthetic injection before this cut was one of the most painful parts of the whole thing!) And later, when more local anaesthetic was needed for stitching, I finally accepted gas-and-air for extra pain relief. Without the underlying warmth of contractions and the euphoria they produced, this relatively minimal agony was suddenly completely unbearable!

And now I’m back to taking frequent doses of paracetamol prophylactically to avoid all pain. Healing twinges and recovering muscle aches are unpleasant enough that I’m back to hiding! Whatever magic I’d experienced has not persisted.

I do now, however, have a new understanding of the potential of pain. It can be surprisingly amazing. It can make even the worst sensations feel better. And, wow, that endorphin thing is definitely real!

It’s too soon to know if this will make me more or less likely to experiment with pain in a sexual or masochistic context in the future. If it’s by choice rather than necessity, I don’t know that I am strong enough to push through the first part when the pain is overwhelming to reach the plateau beyond. And when the different pains created such different responses, am I even able to recreate the ‘right’ type or depth of pain in another way? Is the literal agony of experimentation kind of stupid when I normally don’t have any kind of pain tolerance??

Whatever the answers to these questions, I am fascinated! And more than a little jealous of those who have already figured out the answers that work for them…

29 thoughts on “The painful truth…”