‘It had gotten to the point where it seemed like nothing matters, because I’m not a real person and neither is anyone else.’
– Gillian Flynn, Gone Girl

One of my blogging missions this year was to write more fiction. It’s an aspect of writing that I have always found harder and so often shy away from attempting as it is easier to bash out an opinion piece or rely on facts and research to decorate my own words. Even though it is, by definition, not a description of real events, I feel more exposed by fiction. There’s a vulnerability to revealing potential fantasy that means I feel more weighed down by word choice or imagery. Is that exactly what I’d imagined? Does that create the arousal or sensation that I wanted?

My question, however, involves whether the interactions between the characters in whatever context has been created have to be realistic. When you read it, do you believe that the sex is real? Or even possible? Would real people have responded in this way, or are they acting in an erotically charged manner that would never actually happen? And, of course, does it really matter if they are?

Smut Marathon has brought these questions to the front of my mind as, perhaps unusually for someone who claims to write erotic fiction, completing these submissions has made me realise that I don’t actually write much sex, and the jury members have often fairly criticised me for that. Sometimes there’s no sex at all! I am more comfortable in the build up, in the illicit glances or stolen touches, rather than the mechanics. It’s again an avoidance tactic – I only write short fiction with even my longest stories barely making 2000 words and there’s enough delight and intrigue and possibility of abstract description in the ‘before’ for me. Also, and importantly for this argument, I often don’t develop a story enough for the characters to actually have sex in a way that I can believe. I’d need more words for that and I run out of steam!

This tactic hasn’t been easy in the Smut Marathon assignments, however, and this has been a big reason why I have found it such a challenge. Can I write sex in a 500 or 800 or 1000 word story? And more, can I write realistic sex in so few words?

Except that when I tried to write them, each scenario felt fake. Who really truly propositions a stranger in a lift? (Quick aside – if you have and it’s worked, kudos to you. You have powers beyond my comprehension!) Under what circumstances would that kind of advance be successful and not treated as assault? Even more so after #MeToo, I just could not manufacture a story that didn’t feel corny or seedy or just plain fictional! I accept that this difficulty is likely based in my own limited imagination and ability, but I could feel myself writing bad sex, writing exaggerated erotica that was funny rather than hot. Or worse, cringeworthy.

As you’ll see when I share my entry later this month when the next vote opens (or you can read it in the previous voting page here where I was entry 4), I fudged it. The sexual frisson was created by an external figure. Yes, the main characters were strangers but the man was stumbling into a ready made sexual encounter. The story had already started before I had written a word and continued after I had finished.

Reading the other entries, it seems that I wasn’t the only one to struggle with this ‘forced’ intimacy. The 14 entries included two demons, one ghost, one death sequence and one dream – all scenarios that allowed characters to believably act in ways that neatly bypassed the problems I had faced trying to make a story that felt real!

I hope this doesn’t sound like I’m judging the other authors or think that the stories that didn’t need these tricks were somehow better because I don’t mean to. I’m just fascinated by the process – what makes some stories so good or so difficult to connect with? As we’re reaching the final stages of this competition, the quality is just getting higher and I’m intrigued by what qualifies a story for a place in the semi final, or later the final. Really, well done Marie for setting us such a challenging assignment!

So what do you think? And am I overthinking this?? Does the basis of the sexual encounter need to be realistic for a story to work? Even in the most outlandish settings, do you still need to believe that the sexual attraction is real? I know I do. Stories where the action feels rushed just turn me off; I don’t believe them. I don’t get lost in the story; I get left behind.

But when, as a reader, I can follow the thread from attraction without feeling like steps have been missed, when the action flows naturally and seamlessly, oh yes…that’s the erotica I love to read! 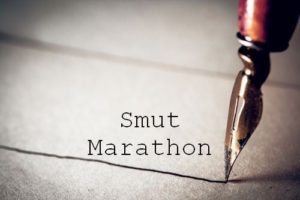