‘Oh doctor, I’m in trouble
Well, goodness gracious me!
For every time a certain man
Is standing next to me
Mmm?
A flush comes to my face
And my pulse begins to race’
– Goodness Gracious Me

‘Doctor, I’m having terrible palpitations! My heart is all a-flutter and it pounds in my chest like I might burst!’

Sally thrust her ample breasts towards Leon with such force that her shirt did indeed burst, flinging buttons off in all directions.

Leon leaned in to examine the specimen in front of him, marvelling at the massive mammary mountains that filled his vision.

‘When I asked you to help with role-play for my medical exams, this wasn’t quite what I had in mind but I’ll play along. When do the palpitations occur?’

Sally shook herself in mock fright, bouncing her bare boobs against Leon’s chest.

‘Every time I touch myself! My heart races and I become so lightheaded and faint. I’m so afraid I might collapse.’

Leon placed his cool, clinical hand against Sally’s hot, heaving sternum. Her heart beat steadily beneath it; a reassuringly sedate lub-dub vibrating through his palm. Wriggling his stethoscope under her left breast, he zeroed in on the apical beat, which again punched out a healthy pattern.

‘I’m sorry, ma’am. It seems fine right now.’ Leon pulled his hand out and moved away, aware that his own pulse was pounding and causing a profoundly unprofessional protuberance in his pants. ‘If it’s really bothering you, we may have to recreate the, um, circumstances that cause the symptoms.’

‘Oh Doctor, do you think that will help?’

Sally licked her finger and placed it against her pert nipple, pinching its peak. Leon’s trousers tightened around the increasingly tumescent truncheon within.

‘Definitely.’ he gulped, ‘It’s for your own good. Show me exactly what you do.’

Sally lay back on the examination couch, wiggling down until her skirt rolled around her waist. Her lacy knickers glistened as her love syrup seeped through the skimpy fabric. Pulling them aside, she showed Leon her soft cave, spreading her legs to widen the entrance and beckoning him closer to its warm embrace.

‘Here. It happens when I touch here.’

A slippery finger slid up through her folds, pressing repeatedly on the hooded button. Sally arched her back as if the prolonged pressure was causing convulsions, moaning in eagerly released desire.

Rushing forward, for science, Leon grabbed her other wrist. Her pulse tap-danced a rhythm beneath his fingers and, with trembling hands, he affixed ECG leads to her chest and switched on the monitors.

With the electronic trace weaving across the screen, a rapid but not pathological picture of Sally’s passion, Leon unzipped his trousers to manhandle the monster that could no longer be contained. His semi-moist treat stick trembled under his touch and, as Sally’s climax cascaded over her and alarms screamed from the over-stimulated ECG, he erupted in unison. Sticky strings of scalding semen spouted from his stiffened sword, signalling the end of today’s investigations.

‘It’s much too soon for that! We must perform more thorough and, ah, probing investigations before I can be sure…’ 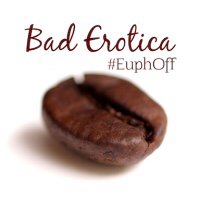 Now, I can’t enter my own competition but I love the EuphOff so much that I had to write something! Do you think you can do worse?? Click the coffee bean to see the competition details, other fabulous entries and PRIZES!! You have until March 31st to wow, delight and horrify me…