Hello, my name is Livvy and I write a sex blog. I write openly about about my sexual experiences, sexual choices and sexuality. I post nude and erotic photos, and am empowered by the sense of freedom that I have gained through doing this. I love writing about sex because, now that I've found an outlet, I can't bear to keep quiet! There is so much ignorance and prejudice and unhappiness surrounding sex in our society that I want to shout from the rooftops about how amazing sex can be; how liberating it is to discover what you need sexually and then find the confidence to just fucking go out and get it.

But despite all of the joy that I've found, I still write anonymously. I don't post photos of my face and I don't tell family and friends about my blog. I’ve reached a point where I wouldn't be especially upset if they found out, but I'm certainly not ready to proactively tell them about it. So even though I happily talk about sex out loud with anyone, my writing remains a secret. It’s hypocritical, but that's just how it is for me right now.

Why am I worried? What am I so afraid of?

Sadly, I stay anonymous because women who talk about sex still face the risk of a significant backlash. Shame. Shock. Ostracisation. I'm afraid that being a women who is this open and in control of her sexuality will have implications for my career in healthcare. I'm afraid that my more conservative or old-fashioned relatives will be shocked, leading to unnecessary family conflicts. I'm afraid of drowning in a deluge of dick pics and other advances from misguided men who mistakenly believe that wanting to have a lot of sex means that I want to have a lot of sex with them. I'm afraid of being shamed or shunned or criticised publicly, and I prefer to hide behind a veil of anonymity.

Which is why I am so excited about the new campaign from the Scarlet Ladies that wants to change all that. The Scarlet Ladies are a wonderful female only organisation that aims to create a safe space for women to be themselves, without fear of judgement or shame, running panel discussions, workshops and social events to promote female sexuality and confidence. Their ‘I Talk Sex’ campaign aims to promote women who write and talk about sex, starting conversations about why they do, and encouraging more women to do the same. They want to eliminate the stigma and shame surrounding sexuality in women by openly and widely talking about it.

'We've been shushed for so long that we lack the confidence to say that this is not OK.'
– Sarah

Sarah and Jannette, the founders of Scarlet Ladies, were kind enough to invite me to the first day of their photo shoot to talk to them about this project. Both are hugely passionate about ‘normalising the conversation’ and allowing women the freedom to talk about sex and their sexual experiences. As a rape victim, Sarah feels that we can only change the rape culture that pervades our society by talking about it and by clearly showing what is and is not acceptable behaviour, and even what is and is not appropriate language to use. For her, Scarlet Ladies is a ‘revolution’ and this campaign in their battle cry. Jannette agrees, telling me that they ‘want to change the direction, change the story’ for women talking about sex.

‘We want to take sex from a dark place where it “should be hidden” into the open. Female sexuality shouldn't be hidden, it shouldn't be dirty.’
– Jannette

Honestly, they are so inspiring that I am really excited to see where this campaign and their enthusiasm will take them!

And it started with a photo shoot. Following a call to their members for volunteers, Jannette and Sarah were joined by 8 other women to form the face of this project. They have chosen women from a diverse range of backgrounds and sexualities who all have very different reasons for wanting to talk about sex. Some have stories to share, others are activists with a message to promote, others just want to celebrate that they have survived, but they all have personal, healthy stories about sex that normalise and humanise the variety within female sexual experience. 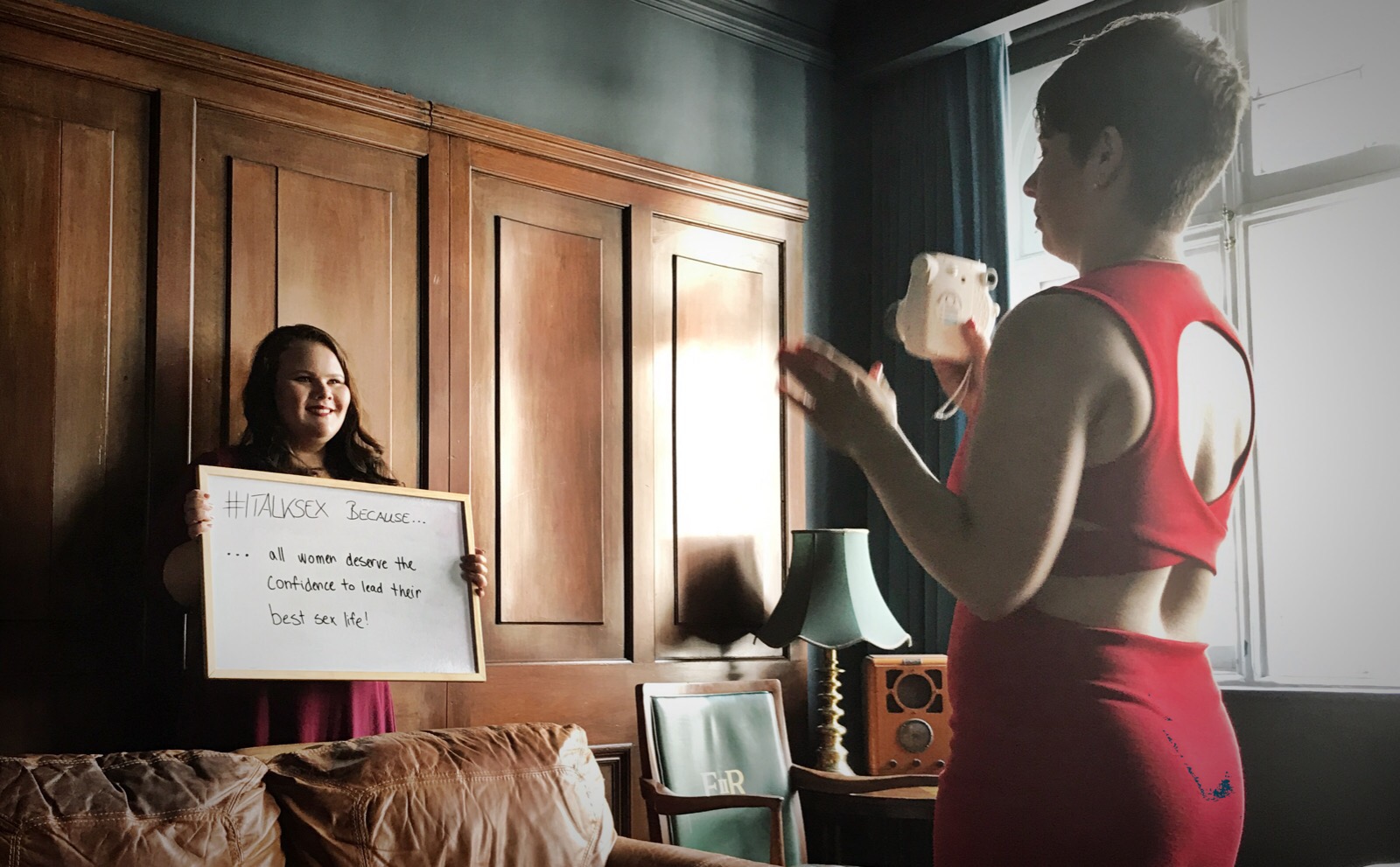 As someone who has found so much confidence in photography, I was also very interested to meet Faby and Carlo, the photographers for this campaign. They specialise in boudoir photography but only shoot women. Faby feels that a ‘woman's body is a piece of art’ and much more interesting to photograph, both because she prefers the shapes and curves in a woman’s body and because of the responses they see in the women being photographed when they see themselves from a different point of view.

‘Women are so good at beating ourselves up about every little flaw. When we show them their photographs, they are so much more confident afterwards. I just want to say “Don't you see you?”’
– Faby

Photographing these women at 23 Paul Street, an exclusive strip club, was a well thought out choice. They were highlighting the sexuality in the ordinary, photographing these women in boudoir poses surrounded by masculine decadence but wearing normal clothes. They are ordinary women who are rendered extraordinary by their attitudes and confidence. They weren't in submissive poses or those directed for the male gaze; they were strong, empowered women with nothing to hide.

The #ITalkSex campaign launches on 23rd August!
Follow @scarletladies to stay up to date with events and publications.
Check out the hashtag #ITalkSex to follow the conversation.

And get writing and talking about sex! We all have so much to say and there are so many people who want to listen.

Why do you talk about sex? What stories do you have to tell?

The #ITalkSex Campaign brings together women from every walk of life. We are united by our belief that by talking openly about what we need, how we feel or what we’ve gone through, we are helping women everywhere to find the confidence and empowerment to accept and love themselves for who they really are.

If you want to help Scarlet Ladies to change perceptions as I am, head on over to their #ITalkSex campaign website to learn more about how we can all get involved and be part of this movement.