I was brought up to be a lady. Not a Stepford-esque housewife or other stereotype, but most definitely a lady. Always well put together, always graceful, always smiling serenely through adversity. And, as the proverb above suggests, ladies don’t sweat. Ladies never reveal such an obvious sign of exertion. Ladies merely glow.

And thank God for that, because I *love* sweat! The silky feel, the salty taste, the fresh smell…it is hot, in all senses of the word. I love how I know that I am working when I start sweating. I run, panting and shining with the evidence of my endeavour, and I am proud of myself. I love how the cold sweat of fear can drive me onwards, whether because of a particularly unwell patient or forgotten promise. It is a hidden sign of intensity, a reminder not to become complacent and I am grateful for it. I also love to see others sweat as it suggests passion and all out commitment, and it’s just hot.

But most of all, I love when sweat is shared. When need defeats the suffocating exhaustion of heat, when all you can do is just take off your clothes, when sex becomes so hot and frantic that I could break out in a sweat in the middle of winter, when all is fire and lust and desire…I love that I can make him sweat, when our bodies press stickily together and we lie panting in the sweaty mess we have made.

So here is a quick something, written as a tribute to sweat… 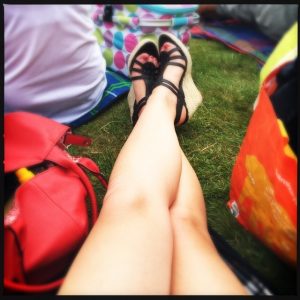 The day was so hot that shimmering currents rose from the road, causing the air to quiver. The sun beat down relentlessly, baking the ground and making enclosed spaces intolerable. Such was the yearly surprise at the glorious weather that, once again, no one was prepared. As she had poured herself into the un-air conditioned Tube, she was surrounded by flushed, sunburnt crowds, all fanning themselves with newspapers. Squeezing herself out of the station, she hoped that there was at least a breeze to move the thick air that still settled around her, but it was nearly as stifling in the open as it had been underground. This was Hell…

As she started to walk, sweat quickly began to form in her lower back. First just a sensation of cool dampness, then a trickle as droplets formed that ran under her dress and into the waistband of her underwear. She could feel sweat pooling between her breasts and running down her arms. She was wearing essentially nothing, but it was still too much. She’d chosen a dress with as little shape as possible, hoping that movement of the floaty material would keep her cool, but the fabric just clung damply to her hips and breasts instead. The humidity stuck a few strands of hair to her forehead and the rest of her curls were dangerously close to frizzy. There was moisture on her upper lip, there was a shine on her nose. God, she was hot.

But, surprisingly, she felt good. She felt…restless. Sweat was tickling parts of her that she never usually acknowledged when just walking and it was strangely intoxicating. The crease of her elbow, the back of her knees. It was even running down between the bands of muscle in her back, bouncing gently over the bones of her spine. The curves of her breasts were glistening, and all she could think about was his mouth on her. She imagined his tongue trailing lazily across her skin, teasing her nipples and licking off the salty residue. She could almost feel it.

Suddenly, she wasn’t sure if it was the heat of the day or the heat of her arousal that was soaking her underwear. Beads of perspiration seemed to caress her thighs as they rolled down towards her ankles. She licked her lips and was reminded of the last time they had been together. There had been a similar heat on that day and she had thrown off her clothes as soon as she’d walked through the door, striding naked into his arms. She remembered how the sweat had soon drenched their bodies as they had fucked in the hall and on the stairs and in the bedroom. Her cunt twitched at the memory of the taste of him on her lips and the sound as he came inside her.

When she turned the corner, she saw him, lounging in the shade of a large tree and looking frustratingly cool. Her heart raced at the sight of him and she grinned wickedly – there was no way that that was going to last!

She kissed him hard, pressing herself against him and trembling slightly at his touch.

‘Mmmm, you taste delicious!’ he said, taking her by the waist and pulling her closer towards him again.

‘So did you still fancy dinner…or should we just go home?’